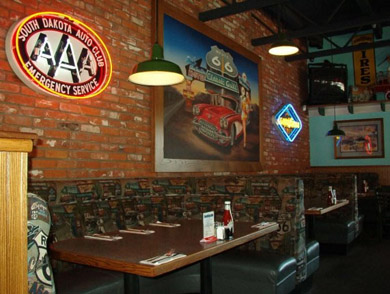 It's been called the Mother Road and America's Main Street. It was 2,200 miles of pavement linking Illinois to California: the road leading to opportunity and freedom - virtues that defined an entire culture. Thousands followed this asphalt ribbon from Chicago to the Pacific, bringing with them the hope of a new beginning.

The 1950's were triumphant for Route 66. For The first time since the close of the World Wars, folks took to the open road. With their windows rolled down and their radio blaring, enjoying the journey was every bit as important as reaching the destination with that new beginning. 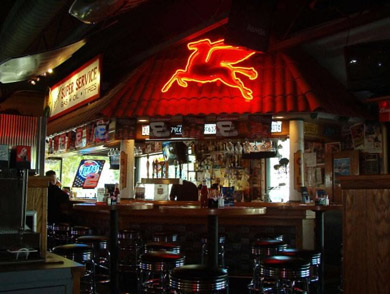 Food was an integral part of those journeys that marked the nation's introduction to roadside diners. Perched on gleaming chrome counter stools, or nestled in cozy, vinyl-clad booths, families felt at home in the dining spots along Route 66. A well-worn menu offered comfort classics like meatloaf with mashed potatoes, cheeseburgers, chili, and big hearty breakfasts. Desserts were displayed like prizes in a trophy case.

From the heartland, over the plains and through the desert southwest, the distinctive flavors and styles of a region were played out in its diners. Thsi glorious taste of America offered a variety of flavors, including the spicy zip of red chili and the mellow richness of warm peach cobbler. Between dining over coffee and laughing with friends, anyone who's traveled the Mother Road has fond memories of their own special dish.

During the 1990's, as the Thomas family thought of opening a family restaurant, they were reminded of the road that meant new beginnings. Determined to renew the feeling of Route 66, it is our goal that Route 66 Classic Grill will continue to bring happiness to the generations who travel her way.